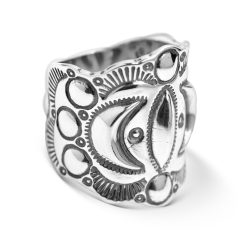 Whether he enjoys mens western cross necklaces or mens stud earrings, our American made jewelry for men adds the perfect element of Southwestern handcrafted jewelry to his overall look. With a wide variety of gemstones such as turquoise, coral and spinel, we are sure to have something that will fit his style seamlessly. Our earrings for men, mens rings, mens bracelets, and other men’s jewelry makes excellent gifts for any occasion such as holidays, birthdays or just because.

Whether you’re shopping for earrings for boys or silver rings for men, our collection of artisan jewelry has an option for you. Some of our favorite designs for guys are cross earrings for men, mens designer bracelets and our mens western jewelry cross necklaces. All of our designs capture the spirit of the Southwest, where they are lovingly imagined and designed, and handcrafted by our talented team of local artisans. Give a gift with meaning and story!