The Naja’s Legacy in the New World. The captivating centerpiece of the beloved squash-blossom necklace is called a Naja. You may be surprised to learn that each of these beautiful crescent pendants contain a story of war, survival, and beauty in the New World.

The Naja, which is the crescent pendant at the center of the Navajo squash blossom necklace, has roots in the Goddess-based religions of Phoenicia, Greece, Crete and Rome. However, it was the Moors – who dominated Spain for eight centuries – who adopted what would become known as a “Naja” on their horses’ bridles to protect the animal and its rider against “the evil eye”. In the 16th century the Spanish arrived in the New World in search of gold, executing their conquest upon ornamented Andalusian horses and introducing the Moorish bridle design to the Navajo and other first inhabitants. 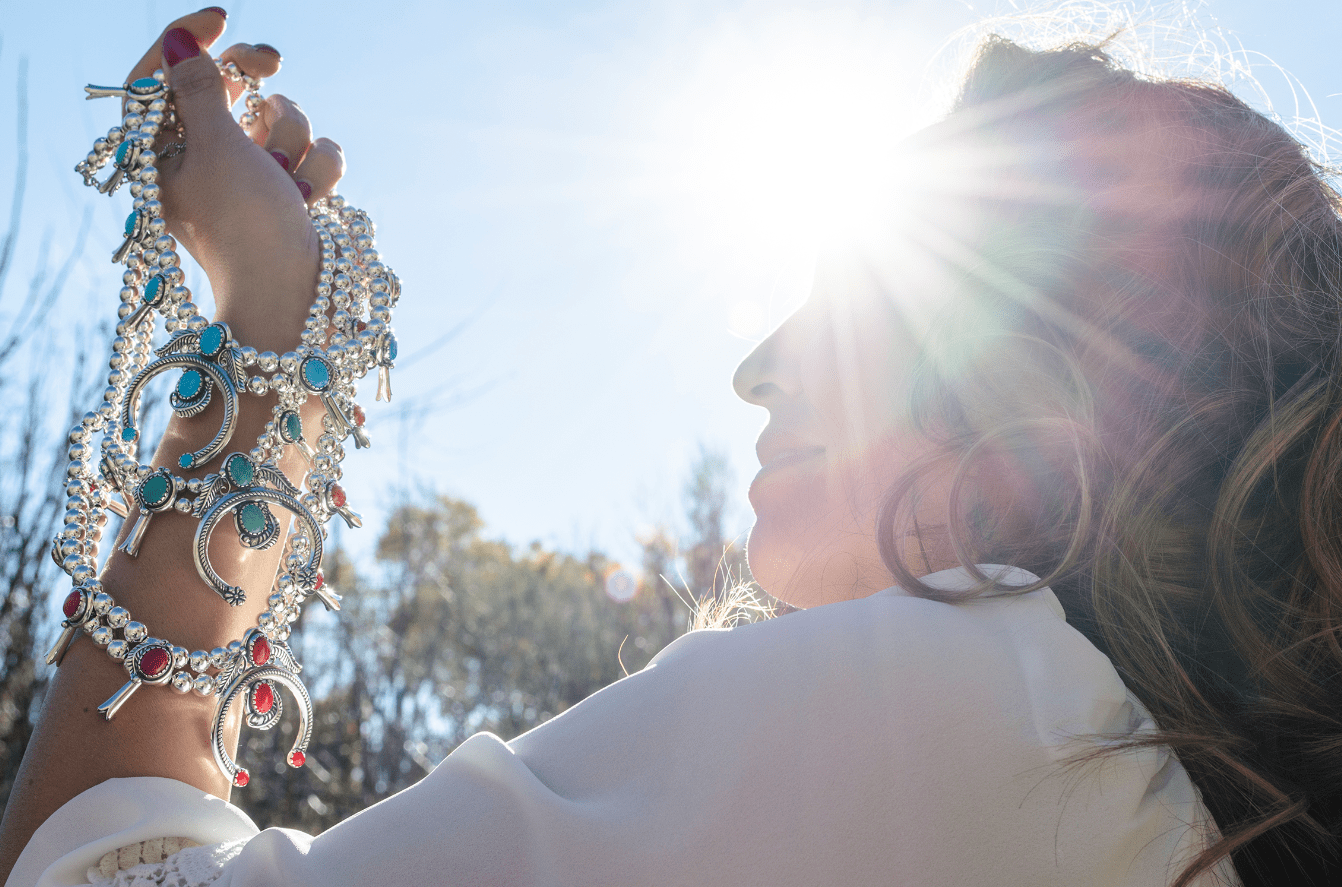 While Navajos don’t consider the Naja to have any spiritual or symbolic significance in their culture and religion, they have always been held it in high esteem as a form of wealth and bravery, proudly worn by men and women. First contact with the Spanish, who were adorned and armed in never-before-seen metals and riding atop strange four-legged beasts, was of course a moment that would forever affect the lives and cultures of the Indigenous peoples of land. To survive, the Navajo became fierce warriors and to return from war or raiding parties with Spanish Najas was most likely a way of counting coup on their enemy.

It wasn’t until the 19th century that the Navajo began to integrate silversmithing into their lives and culture, a practice that was also imported from Spain.  The ability to work in silver, leather and other metals allowed the Navajo to move their culture from a warrior society to that of a merchant society. The Long Walk of 1864, a forced 300-mile relocation and detainment of all Navajo people by the United States, was also a key moment in the necessary adaptation from a nomadic to more settled existence.

Upon the Navajo’s return from their four-year detainment at the Bosque Redondo internment camp, life was forever altered. Where prestige and wealth had come from raiding, it now came from sheepherding and trading. Silverworking became a very important part of this transition. At this time the squash blossom necklace, most famous for its inclusion of the Naja pendant, became popular. The squash blossoms are represented as having long petals at the brink of opening, connected to a spherical bulb at the base of the blossom.  While the squash plant represented life and sustenance to the Navajo, originally the flowery “beads” represented the pomegranates of Andalusia where a variation of this design can be found in the motifs of Granada, Spain.

Today, for some Navajo, such as myself, the Naja is a reminder of our people’s resilience in the face of unthinkable adversity. It is a symbol of creating something beautiful out of despair, of rising from the ashes. In that way I think the Najaremains as it has always been – a universal symbol of triumph over evil.

This month I hope you honor the triumphs in your own life, or in those you love, by celebrating the Naja in all her beautiful forms.

In Navajo we say Ahéhee’ — Thank you. 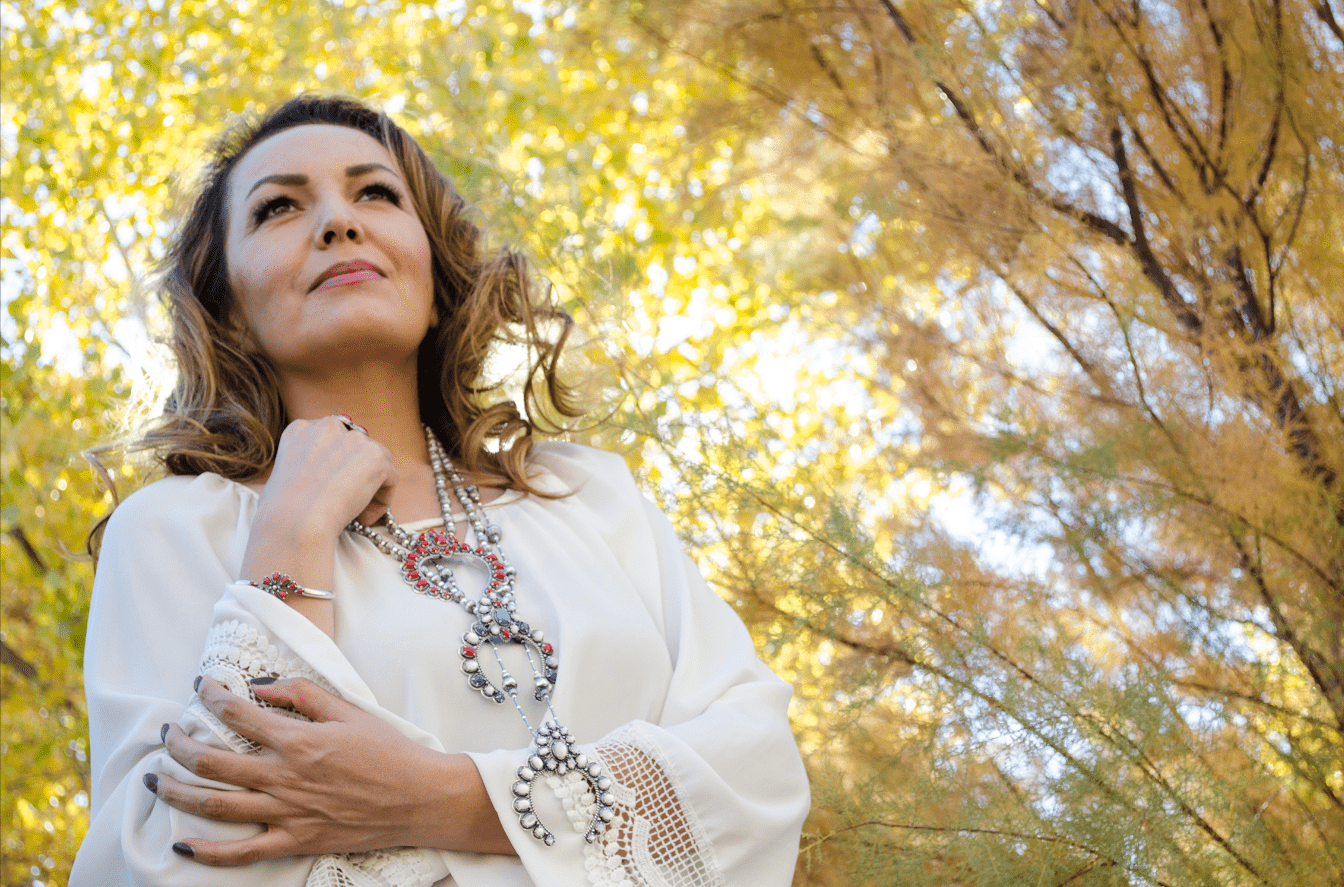