#AWYou Deb Haaland for Congress. This month we find ourselves inspired by a woman who is pushing New Mexico to the forefront of history. Shortly before 10 p.m. on June 5, Debra Haaland celebrated her first victory on her path to Washington in a campaign that is growing the way all sacred things grow, from the ground up. With standing room only in her Albuquerque campaign office Haaland, a Laguna Pueblo woman, took the Democratic nomination for the state’s 1st Congressional District, positioning her to be the country’s first Native American woman in Congress. Next up, the general election on November 6, 2018, where a victory would mean a landmark event for a country that less that 100 years ago didn’t allow Native Americans the right to vote. 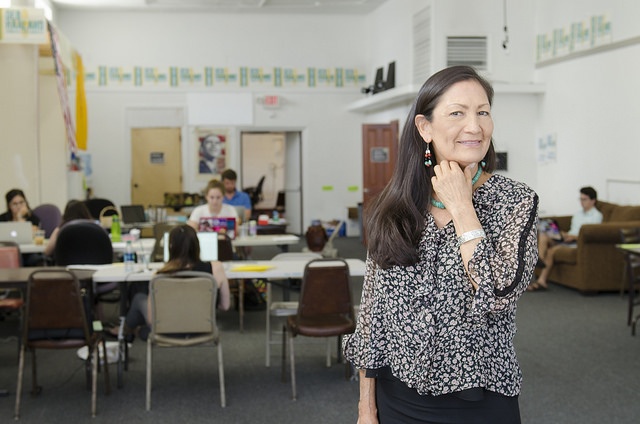 Today, Haaland headquarters still teems with excitement. As I arrive to meet Haaland I find her surrounded by a team of young people, all working with passionate millennial enthusiasm. The atmosphere is electric with a feeling of purpose, of community and pride, of selflessness and passion, all which carry over into my conversation with Haaland, who greets me with a welcoming, dimpled smile that reminds me of aunts and kitchens and lessons on how to walk in beauty.

“On election night I said, ‘this is a victory for women, a victory for working people, a victory for Indian country,’” says Haaland. “And that meant a lot to the Native folks that have worked with me on this campaign and who I’ve advocated with in making our issues front and center. ”

During a powerful TED Talk in 2016 Haaland, a child of a Pueblo and Norwegian-American military family and single mother to one daughter, asked a room full of women, “Who speaks for you?”  Throughout her campaign she has maintained a powerful message of advocacy for women. Today as we sit together, I am in awe of how gracefully Haaland stands on the cusp of being one of the most powerful voices in the country for women and people of color. Her power, I observe, is in her truth. It is her ability to relate that makes her a dangerous opponent.

“I’ve felt for a long time that we need people in office who have experienced ‘the struggle,’” says Haaland, whose platform includes fighting for medicare, 100% renewable energy, women’s equality, and a permanent solution for DREAMers. “I’m proud to know what it’s like to rely on food stamps, and wait at the Indian hospital to get healthcare, and things like that… I can’t speak for my tribe or anyone’s tribe but I have all of that history and perspective behind me, and that’s where my voice will come from.”

To know Haaland is to know where her voice began, amongst the cornfields and red earth mesas of Laguna Pueblo. It is there, she says, that she spent hours watching her grandmother work to prepare the food that her grandfather grew. It was there that she learned about hard work.

Emotion takes over as Haaland talks about her grandmother, who the U.S. government sent over 100 miles from home to boarding school when she was just 8 years old.

“She went through a lot of hardship; both my grandparents when through a lot of hardship preserving our culture and tradition for us because the world was changing and they recognized that. So at the same time they were protecting our traditions they were encouraging us to get an education and be a part of the change. That was their way of ensuring that we would have a future for our people,” says Haaland, also reflecting on her mother who worked for 25 years as a federal employee in Indian education.

Haaland says she also admires the work of  Kalyn Free (Choctaw) and Ada Deer (Menominee), who both ran for Congress during their careers and advocated for Indian issues, laying the groundwork for women like herself.

With an impressive career behind her and even bigger things to come, Haaland has already earned her spot on the list of inspiring female “sheros.” She says her advice for young women who have a dream that may seem impossible is to keep getting out there and to not take no for an answer.